Sergio Larraín died at the beginning of 2012, almost in oblivion in a small village, Tulahuén, in the Limarí Valley, in the interior of Ovalle in Chile. The Editorial Xavier Barral North decides to publish a retrospective book in relationship with exhibitions in Arle and Paris in 2013. The book contains, in addition to letters written by Larraín to Cartier Bresson, Agne Sire and Sebastián Donoso, texts by Agne Sire and the Chilean critic Gonzalo Leiva Quijada. Unfortunately, the critic Gonzalo Leiva could never find Larraín while still alive.The text is quite baroque. Larrain refused to be interviewed. He even refused to attend the opening of a major retrospective exhibition of his own work at the Modern Museum in Valencia in 1999 . His friends say that he was never a photographer but a mystic. Over the years, Larrain gained a romantic reputation and cultivated a fatal "character" in the words of the writer Roberto Bolaño.

The recent book retrospective of the work of Larraín delivers us images of Valparaiso, Paris, London, Santiago, Italy, Bolivia, Peru and Argentina. His previous published works are books that in all editions have been sold out for many years, and second hand copies are highly priced.  This is the case of ”The rectangle in the hand” (1963), ”Valparaíso” with text by the poet Pablo Neruda (1991) and ”London” edited by Martin Parr (1998)

The book opens with distinct notes of Larraín corresponding to different periods. In a 1982 letter, his nephew Sebastián Donoso, who showed him his desire to devote himself to photography, advises that: "first is to have a camera that you like" then, "having an enlarger to your taste". Finally "wander and roam by unknown parties, and sit when one is tired under a tree, buy a banana or some bread"

Behind the concept of wandering, is the idea of the flâneur. This is the framework or visual conception of known photographers : Cartier Bresson, Edouard Boubat, Christer Strömholm, Manuel Alvarez Bravo, and Sergio Larrain.  Cartier Bresson conceived his own concept "moment decided" based on his walks and urban observations. The myth of urban landscape and its richness in visual codes is evident. The image apears on the street, the city invited the images, the photographer will fit in a wandering, in flaneur, a hunter of those images.

The flâneur concept has literary origins, particularly of the romantic period.  E.A. Poe, Baudelaire and Walter Benjamin have been fascinated by the spirit of the flaneur. Baudelaire went out to wander the city, letting himself be surprised by what she offered. Benjamin speaks to us of a being "who reconstructs the city topographically, ten, a hundred times, through the passages and doors". The flaneur with his eternal childhood invigorates the spirit of curiosity, making him an acute observer of the manifestations of  the urban landscape. The flaneur finds pleasure in the simple act of wandering.

A flaneur wanders through the streets that deeply describes urban life. He or she traffics the crowd driven by intellectual curiosity; deliberately making the choice of knowing, choosing different ways to record the minutiae of everyday life. The researcher Miguel Garrido says: “The universe of the city shapes the ideal showcase for an erotology of the senses in which the walker not only constructs a semiotic relationship with the nets of the space in which he is enveloped but also is driven by his itineraries to establish an erotic exploration of the street as a foreign place of daily discovery”

Some theorists give to the flaneur the same features to an ethnographer, evoking their main function: look at and describe the urban niche. But unlike the classic Ethnologist, the flâneur moves adrift in the urban space, not being anchored in any specific place. Contributions that have the flanerie, drift and the ethnography of urban as methodological practices for discovery, knowledge and understanding of the public spaces are evident.

Larrain in his visits to cities such as London, Paris, Santiago, Buenos Aires, etc, moved as a flaneur. Always discreet, at a distance, looking for angles, spaces, geometric lines. Also was the case of Valparaiso 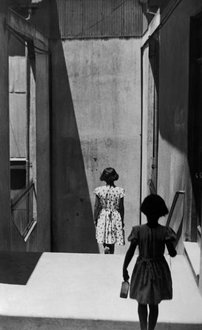 The first time that I was drawn to the work of Larrain was when I observed his work of Valparaiso, my hometown, where I spent my early years and my youth. Larraín travels the streets and hills of the city, discovering its hidden spaces in the endless maze of staircases. The image of two girls walking down the stairs (1957) is unique; a repetitive image of surrealist character that lead us to associate them to the iconography used by Giorgio de Chirico. Larraín, fascinated by the shadows, angles and geometric figures fell in love with Valparaiso. Spirit Larraín flaneur, felt comfortable in the hills of this port. Larraín, accompanied moments with poet Neruda, ran tirelessly the streets and hills of Valparaiso 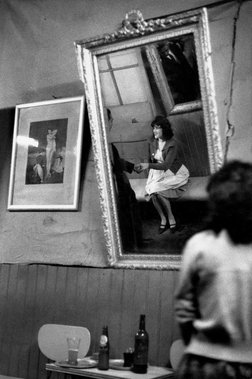 Another image is the taken in the brothel "seven mirrors" located in the small street next to the Matriz church. A woman who looks lost and resigned dances with her client, who appears to be a well groomed man. Mirrors reflect other couples dancing. Larraíns' images recall the work of Brassai in the brothels of Paris. It is also easy to associate them with the images come off the mirrors of Borges stories. The brothel “Seven mirror” was just in the very neighborhood where I ran and played as a kid, and bought fish in the morning hours. I remember well the cobbled streets of dangerous slopes and the voices of the sellers of bread, milk and cheese. On winter mornings, a dense fog covered the streets and stairs of Valparaiso. 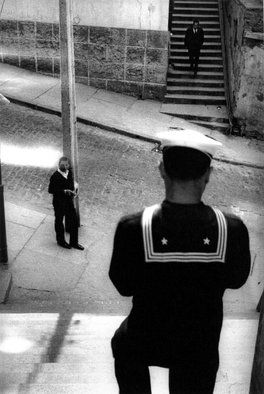 Valparaíso, city of stairs, corners, labyrinths, streets that are lost in the hills and city of sailors. Larraín seeks a position, angle, from the top of the stairs, where he observed the movements of the passers. Valparaiso invites the voyager to sharpen his eyes.  The camera is located behind the back of a sailor, which descends the stairs. On the street, a man observes the sailor. On the other side of the street, a man walks down the stairs. The men move in unknown directions as if they were to be. We will never know. Simply unknown maybe with a similar fate? 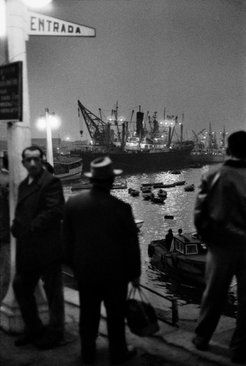 It strikes me also the image, where one of men by the pier, waiting for a barge in the port of Valparaiso at night. Reminds me of the boat whistles and men who cry when they approach the pier with its barges. The smells of the sea. Larraín is always of observer, discreet, something in the distance.  The work of Larraín about Valparaiso, reminds me of the text of the Italian writer Italo Calvino: "invisible cities" where the human imagination is not necessarily limited by the laws of physics or the limitations of modern urban theory. J.V. Monzo, director of IVAM, commented the year 1999 at the opening of the exhibition of the work of Larraín in Valencia, Spain:  "his work on Valparaiso and London should be reference works how to portray a city and learn to capture its essence".

The contemporary city is different in the studies by Walter Benjamin and Henri Lefebvre.

The sociologist Michel Foucault tells us that we are prisoners of a prescribed order, of which we sense and know only fractions. The anthropologist Manuel Delgado in Barce-lona sees the city as a place of various spaces to interact. The street, a space exclusively dedicated to the human experience, provides an anonymity that allows the citizen an unexpected display of roles and personalities. When mass society makes use of urban space, not in the form that is designed, it will seem "frightening" to the politicians who planned the city. The authorities have constructed the city as a scenario for soft and peaceful interaction and social relationships. Social movements, often use the public space according to their own needs that not always corresponds to the wishes of the établissement.

The question is obvious: today, can the photographer, in a city biased, secreted, discussed, take it and know it with the spirit of the flaneur. Is it possible to rebuild the critical gaze of the flaneur of the city? Instead of being a captive of a daily routine or an established ordinance, to follow ones emotions and look to urban situations in a new and radical way. The flaneur  does a tour non-disciplined, allowing access to other types of non-controlled experiences.

Another necessary question is whether Benjamin postulates are still valid so far as: "any urban space can be understood as a repository of symbols and metaphors, analogies and sensitive images"

Born in a well-known family of architects in Chile, Sergio Larrain had the resources to fly to London, Paris or Rome, as well as other places. Inspired by the works of Cartier Bresson and Edouard Boubat, Larraín was walking aimlessly for nearly 30 years in urban centers across Europe. Larraíns' images have a hint of romanticism, of recognizable cities and at the same time leave us with a feeling that this no longer exists, that the spaces and corners are forever gone will not return to the flâneur. It is perhaps, a photographic naivety that will not return.

Cartier Bresson invited Larraín to join Magnum in 1958. This was how he became the first Latin American photographer in belonging to the legendary Agency. Agnes Sire, Director of the Henri Cartier-Bresson Foundation, met with the work of Larraín in 1980, as he assumed the artistic direction of the Magnum Agency. Sire re-organized Larrains' portfolio, containing 5,000 photos, and started an epistolary relationship with him, which lasted for more than 30 years. They never met in person. The retrospective book on Larrain is fairly complete. It contains the major works of Larraín. However, it strikes me, the absence of photographs of the North of Chile and portraits of some artists and writers, such as Neruda in Isla Negra. The design and printing of the book has a high quality.

Convinced that social conditions and the formation of the ego prevents humans know themselves, Larraín abandoned his past life and Magnum and searched anonymously for nearly 30 years on trails, roads, space and under the open heaven of the Limarí Valley for the transcendental truths.  Disappointed as the photograph was used by different media, Larraín decided not to publish more work. Larraín burned his photo work but is saved in part thanks to his friend Josef Koudelka which preserves a copy of several of those negatives. During the dictatorship of Pinochet, they raided her home in Santiago and stole all their cameras, including his old Leica with which had taken their best shots.

Tired of the miseries of men, in Tulahuén he devoted himself to painting, writing notes and notes, small drawings and above all to meditate. Larrain was never fully recognized in Chile until after his death.