The last days of Walter Benjamin

The philosopher Walter Benjamin fled from Germany to France when Hitler came into power in 1933. Seven years later, he was forced to flee from Paris. Out of fear that he was going to be extradited to the Gestapo, he committed suicide in Portbou, a small Spanish town close to France. He left a bag of notes that disappeared forever. It is a paradox that Benjamin's life ended at the border. He had always been fascinated by borders, and his essays are about limits

and borders. In Portbou Benjamin not only encountered a border, but he also faced a limit.

Afternoons in Portbou were still warm, even though it was the end of September. Walter Benjamin slowly placed the clock on the bedside table, along with a few small stones that he had picked up during his seaside walk this afternoon, the fully scribbled notebook, his dirty glasses, his pipe and the pills. His body was still exhausted after the nine hour long walk from France, over the mountains. He didn't have the strength to take notes today as he was accustomed to, he was very aware that the memory is a fragile and treacherous thing. He lay down on the narrow bed and he looked up at the ceiling with an indeterminable color. On the floor lay the Gerona daily with big headlines about the latest meeting between Franco's Minister for Foreign Affairs, Serrano Súñer, and his German colleague, von Ribbentrop. They were supposed to lay down the general outlines for an upcoming meeting between Franco and Hitler, which was going to take place in October 1940. These were the days when there was talk about the apparently inevitable pact between Germany, Italy and Spain. Walter Benjamin did not have the best timing imaginable to pass the border to Portbou.

When the Germans occupied Paris on June 14th 1940 Benjamin had already left the city. For the second time in his life, he had been forced to leave his home, once again leaving his books and notes, without which he felt empty and naked. This was a tragedy for Benjamin. He left some books with a couple of the few friends he had left in Paris, others he hid. And his friend George Bataille helped him to hide parts of his microscopic notes in the Paris Library, those notes would later on form the basis of his famous “Passagenwerk”. The writer Hannah Arendt would later describe Benjamin "a man of words, a man whose home was his library, gathered with passion and patience over many years".

Together with his sister Dora, he travelled in the summer of 1940 to Lourdes in France where he was advised to go to Marseilles to arrange a visa to the United States. Benjamin came to Marseilles in mid- August, only to be told that he needed a stamp from the French Consulate; a stamp he couldn't get because he was a refugee. The last resort was to travel to the United States via Spain and Portugal. Along with Benjamin was also a woman, the photographer Henny Gurland and her 17 year old son, Joseph. They had decided in Marseilles, where they met Benjamin, sharing the same fate, to try to cross into Spain.

During the night of 25 September, Benjamin arrived to Port Vendres, south-east of Collioure, to meet Lisa Fittko, an opponent of Nazism. She warned that the roads to the border had become unsafe due to the cooperation between the French police and the Gestapo, but said that there was another, unattended way, which the Spanish republican general Lister had used to retreat when Franco troops invaded Catalonia. Lisa Fittko took the whole company to the next village of Banyuls-sur-Mer where they met, among others, a socialist by the name of Azema, who previously had helped many antifascists across the border. Azema had a hard-to-read hand drawn map of Lister's. He warned of the difficult route but Benjamin and his company was determined to try, having no other alternative. Azema recommended Benjamin and the others to leave at around four a.m., so that they could hide among the workers on their way to vineyards in the area.

The same evening the group decided to make a reconnaissance of the route. Benjamin carried a black leather case that he, despite the weight, did not want to dispense with. It contained important documents, worth more than his own life, Lisa Fittko had heard him say. They slowly walked uphill and Benjamin who previously had suffered from a heart condition was forced to rest with frequent intervals. Eventually the group turned back to the village but Benjamin, who felt weak, decided to remain overnight at the trail despite thin clothing and the risk of thieves. The day after the company returned and continued into the mountains. Benjamin had to rely on Lisa Fittko and the group members took turns carrying his heavy bag.

Spanish border police immediately understood that these where stateless refugees, created by the new political order in France where Vichy had formed an alliance with the Gestapo. After half an hour of waiting, the refugees were made to understand that they could not be allowed to continue. In accordance with the new provisions from Madrid, permission from French authorities was required to leave France; an exit visa from the U.S consulate was no longer enough.

Walter Benjamin and his companions were accommodated in a small guesthouse in Portbou, south of the border, waiting to be returned to France. The realization grew that available options were strongly limited. How many hours remained before the Civil Guards would collect them to escort them across the border? Nine? Ten? Darkness had settled over the hamlet and silence was complete. The people in the bar downstairs had gone home a long time ago. A train whistled. Was it on its way to France or was Portbou the terminus? When was the first train leaving for Barcelona the next morning? It was no use trying to sneak away to the train station despite the fact that it was so near. Everyone in the village would know that they were the foreigners and that they were trying to escape.

The idea that suffering the same fate as his friend and artist Karl Einstein who, tired of being stalked by Nazi troops in Paris, took his own life in a small village in the French Pyrenees, tormented Benjamin. He turned on the radio. Lluis Company, President of the Catalan republican Government had been arrested by the Gestapo in France and handed over to the Franco troops. A speedy trial and execution was mentioned in the news.

The border situation made Portbou a place of exile during both the civil war when the republicans were fleeing Franco's troops and later during the Second World War, when those who were persecuted by Nazi troops fled in the direction of Portugal and USA. Portbou suffered many air strikes by Franco's troops during the Civil War. The town was important in order to avoid the withdrawal of the Republicans. Franco wanted to prevent the retreat of the republican troops to France and the possible help from French sympathizers.

Through here passed most of the nearly half a million people who fled fascism at the end of the Civil War. The Coll de Belitres pass is the most easterly crossing on the French-Spanish border, between the town of Cerbère-sur-Mer and Portbou. Paradoxically Belitres in Catalan means undesirable, marginalized, outcast. When Walter Benjamin came to Portbou, in September 1940, he found himself in a devastated city, with the streets shattered, destroyed buildings, without any lighting and with obvious signs of abandonment.

Benjamin stood looking through the window facing the street. He could smell a hint of the sea. His friends on the other side of the Ocean would remain out of reach and he would be sent back to France and the Gestapo. There was no way out. While he pondered over the news that he had just heard, a conviction took hold of him and he became nostalgic. A lump grew in his throat and his eyes became moist. He dried his tears and cleaned his glasses in silence. Walter Benjamin took out some sheets of paper, envelopes and a pen from his black suitcase and began writing. While he was drinking tea he swallowed morphine tablets one after another.

Finally an independent act; finally master of his own destiny. Perhaps, at the end, he would no longer feel as an outsider, as a “Belitres”, as a “Homo Sacer”. At the same time as Benjamin began swallowing his pills, a moth came in through the window, drawn to the bare yellow bulb suspended from the room ceiling. The moth began to hit the bulb, repeatedly, with a monotonous swishing from its wings that could be heard clearly.

With his unordered style of writing Benjamin wrote a letter to his friend Adorno, who was waiting in North America. He was thinking about writing several last letters, one to his friend Scholem who in vain had been waiting for him in Jerusalem for many years. But he never did. The letters were supposed to be frank and factual, and absolutely not nostalgic, in the opinion of Benjamin.

After an hour his arm felt heavier and his mouth drier. Half naked he had thrown himself on the bed, he had his grandfather’s very fine and big gold watch on the bed side table, and he was constantly checking the time. He drank all the remaining tea and kept drinking tap water. The thirst was not stilled, instead he got a racking headache like a blow of an axe and an enormous fatigue gripped his entire body. He stretched out on the bed again. It felt as if his body was about to split into parts. He closed his eyes involuntarily and attempted to open them again. It was difficult. He did not hear the moth any more. Above the sea a flash of lightning ripped the skies apart and a faint light hit the window. Soon after it started to rain heavily. Benjamin was sure he would never again experience the city with a stroller's eyes.

Officially Benjamin died in the morning of September 26th, leaving only a black bag. He was 48 years old. The body was thrown in an anonymous grave. The death records of Figueres say that “a bag with glasses, a pipe and some papers with unknown content” was recorded. This content was lost forever. 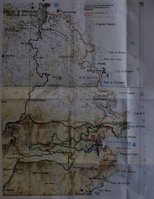 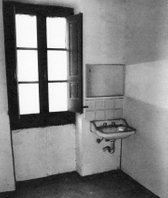 Room 4 at the Hotel France in Portbou